Our method: connecting people, technology and systems.
We cannot succeed alone: we will succeed with our environment, with our customers and partners, with teams that are motivated and forward-thinking.

Read the message from our President & CEO
+
Careers

In order to meet the growing need for digital security and asset management, LACROIX and LEDGER are joining forces in a partnership that strengthens the evolution of the French technological ecosystem.

An alliance driven by the resurgence of French-style innovation

According to a study by the World Intellectual Property Organization (WIPO), in 2021, France is continuing to make its way towards the top 10 most innovative countries in the world. Despite the dominance of Switzerland, Sweden, the United States and even the UK in the rankings, for the past 10 years, France has continued its rapid progression in the WIPO ranking. While France was only 22nd in terms of innovation in 2011, the country is now on the cusp of the top 10, in 11th place. This meteoric rise shows “the importance of public policies and incentives that are designed to stimulate innovation”.

The boom of French Tech

In addition, in 2021, the French Tech ecosystem is expected to have raised more than €10 billion, which is a record for French entrepreneurs. This enthusiasm that investors have for French unicorns can be explained by a resurgence of French-style innovation, as shown by the increasing number of start-ups that have reached unicorn status, a figure that has risen from 3 in 2017 to 19 in 2021.

More than just a method of investment, an entire network of start-ups has been created in recent years, driven by government action and a paradigm shift in the mentality of the French, who are more and more likely to embark on an entrepreneurial adventure. In spite of the health crisis, business creation increased by 6%, while economic activity fell by 10%. 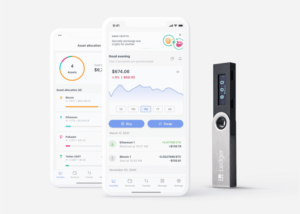 Launched in France in 2014, LEDGER is the world leader in securing and managing digital assets. This scale-up designs and markets hardware and software products and services for individuals and businesses.

The current situation in relation to the democratisation of cryptoassets, as well as the exponential growth in demand for LEDGER’s hardware wallets – more than 3 million units have been sold to date and 15% of digital assets worldwide are protected by a LEDGER key – has called for a change in production capacity for the Tech unicorn.

In response to the huge rise in demand, LEDGER decided to partner with LACROIX to produce its Nano S and X products locally.

This partnership is emblematic of the new position of French Tech in the French economy. […] I welcome the partnership between Ledger and Lacroix, as it allows two worlds to come together, growing both French Tech and Industry 4.0 at the same time.

French industry accounts for 78% of research and development expenditure, representing an annual amount of €23.4 billion. The fabric of French industry, which is ranked 5th in the world, demonstrates its resilience. Brought together around French Fab since 2017, the industrial ecosystem has showed what it is capable of in terms of technological innovation, both in relation to the offers proposed and the development of the means of production.

This is why, here at LACROIX, we believe that industry should evolve constantly. This is why we are accelerating the digital transformation of our means of production, by increasing investment in R&D. Innovation is the key to the future; this is the gamble that Vincent Bedouin and LACROIX took by investing €25M in partnership with the BPI bank, among others,
to build its new Symbiose factory in Beaupréau, spearhead of industry 4.0.

This factory of the future demonstrates the ability of French manufacturers to transform their businesses and highlights the digitisation of their activity. This is more than just a technical development, it is a small industrial revolution which, for LACROIX and many others, is part of a policy of relocating and/or upgrading factory work through the automation and digitisation of repetitive tasks. The aim is to be able to serve as many customers as possible with respect for existing social, environmental and economic ecosystems.

The agreement reached between Ledger and LACROIX illustrates the renewal of our industrial policy and our ambition to accelerate the industrialisation of any highly technological start-up in France. It also demonstrates the synergies between established groups and emerging players, which is something we want to encourage. In addition, I see this collaboration as an initial result of the support provided to the Lacroix 4.0 factory project by France Relance. Through innovation and investment in the production tool, it demonstrates the relevance of choosing French production, both economically and in terms of industrial resilience.

Since this summer, LEDGER has been producing the electronics cards of its Nano X and S keys at the Saint-Pierre-Montlimart site of the LACROIX group. Over the course of 2022, production will be moved to the new Symbiose factory, spearhead of French industry 4.0.

We chose LACROIX because we are positive that they can provide safety, agility, quality and volume. This is essential at the critical stage of development we currently find ourselves at and given the rapid expansion of our market alongside the growing adoption of cryptoassets around the world.

This unicorn company, created in 2014, and this family-owned, quoted SME company, whose story began in 1936, are two very complementary incarnations of French success stories that have an international reach. This combination of expertise and intelligence from these companies, members of
French Tech and French Fab respectively, is a demonstration of the strength and agility of the French entrepreneurial landscape.

This is more than just a partnership, it is a combination of skills between two companies at the cutting edge of their respective industries.

By partnering with LEDGER, a French Tech unicorn that is growing fast, we partake in something that is more than just a partnership through a common vision: we share an open and innovative collaborative model. This is what the alliance of French Fab and French Tech is all about.